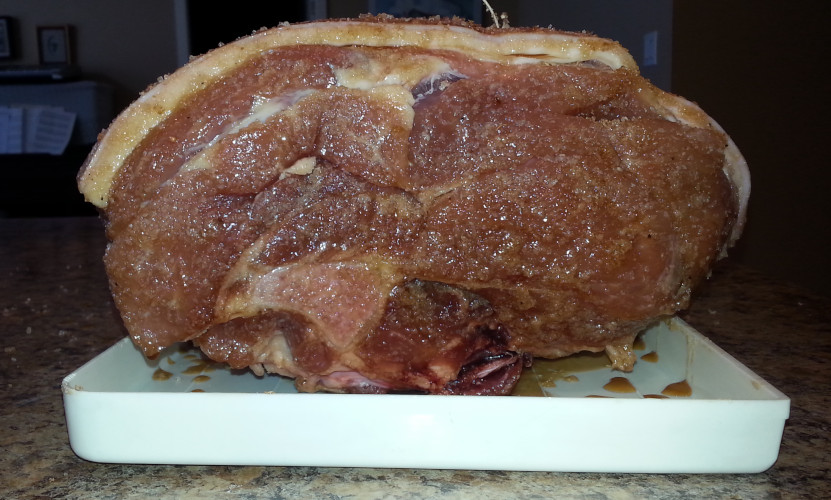 The last ham was pretty tasty, but I didn’t get full penetration with the brine. This time I’m going to brine for a bit longer… actually quite a bit longer, because I’ve got a much larger piece to work with.

Thrifty’s has pork leg on sale right now, a dollar per pound. We picked one up this morning that was a little over 19 pounds (actually 19.22).

This is more than twice the size of the last ham I made, and much leaner. The fat cap is no more than half the thickness of the other one, and there is much less marbling in the flesh.

A common formula for brining is two days per inch thick, plus two days.
The flesh is about six inches thick, top to bottom. That would come to fourteen days. I’ve decided to go seventeen or eighteen days, soak for one day, and then air dry for two or three days. I’m aiming for about three weeks from start to smoke.

I’ve applied the first batch of Brenchley’s Basic Brine. Tomorrow I’ll bring it in and pour off the ‘syrup’ (mix of dissolved brine and pig juices), and rebrine.

The ham overhangs on the pan I’ve got it in, though. We tied it, to get a better shape.

Better. It still overhangs, but I have a little more hope the liquids will end up in the pan rather than in the fridge. We still put newspaper under the pan to catch the drippings, though.

Still overhangs, but the sides are much better. I can’t do much of anything about the hock, though. It’s well-packed with brine and it’s a small cross-section, hopefully not too much will come out to make a mess.

One day in, already seeing some progress.

The flesh is a little darker and firmer. The piece hasn’t shrunk much, but that will come. Poured out the extracted fluid and had almost half a cup… I’ll call it half a cup altogether because there was some in the pan I didn’t bother waiting for and just washed off.

Rebrined the piece and placed it in the pan skin side down. I think I might turn it each time, see what that does for even distribution of brine.

Speaking of which, I might need to mix some more tomorrow or the next day, I’m almost at the end of this batch.

This is the ‘underside’ of the ham. Again, I see some darkening of the flesh and it’s quite a bit firmer than it was yesterday.

The hock still had some brine packed around it, but I topped that up.

The next update was not, in fact, tomorrow. Which is strange, because I could have sworn that…

As might be expected, the ham is continuing to firm up. It’s not getting a lot darker now, but I can see it drawing back a bit from the bone. In the first picture the flesh actually came past the bone, now it’s more or less flush.