I’ve been toying with an idea for a while regarding chess with more than two players.  I think I see a fairly simple way to play chess with four players. 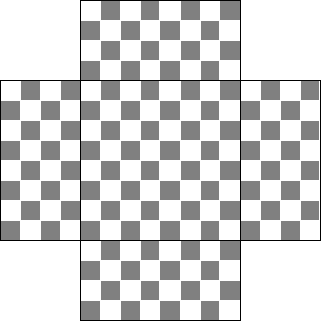 The board is pretty simple, take a standard board and put a half-board on each side such that the checkerboard pattern is continued, as shown in the diagram.

Each player has a different color set of pieces, arranged normally in the two outer-most ranks.  This arrangement gives each player two additional ranks to maneuver in before entering the mosh pit that the center board will become.  Pieces move according to normal rules, from the perspective of the player (thus, the player in the West position advances toward the East… but the East is not his only opponent).  Kings are removed when they are checkmated; play continues until only one king remains on the board.

Variations and Other Ideas

When a king is taken, normally that ends a two-player game.  Everyone packs up and goes home (or starts another game).  In a four-player game, however, there are more options.

In a normal game a pawn that reaches the other side of the board is promoted (usually to queen, sometimes to another piece — most often a knight).  The same happens in this game, but that’s a long way to go (fourteen ranks instead of six).  Consider allowing a pawn that reaches the last rank of an adjacent player to be promoted as well.  This probably won’t be any easier, the pawn has to capture at least four other pieces in order to move far enough diagonally to get promoted.

It might be worth considering making pawns slightly more capable.  Perhaps they can move in any forward direction (NW, N, NE, if facing north)… and perhaps even due south (retreat!).  This is a departure from how pieces can normally move, but it may be a change worth making.

Instead of having four ranks in which to maneuver before entering the main battle, consider using only three or even two.  This will undoubtedly make for a faster game, especially if the teams start in contact with each other.

I suspect that you could even use this as something of a handicap.  Starting back a bit farther may give an advantage, more time to prepare before entering the main battle.  On the other hand, starting closer might be an advantage in that it lets you try to gain control of the main area sooner.

Another variation, perhaps each player could choose where to start, closer or further from the battle site.

The rules initially presented assume mutually antagonistic forces, everybody wants everybody else defeated.  You might consider instead two sets of allied forces working against each other.  For this variation allied forces are considered friendly to each other and do not threaten each others pieces (so if white and green are allied, green cannot be considered when putting white in check, and vice-versa).  Allies might be neighbors (so South and West are allies and North and East are allies), or they might face each other (South and North, East and West).

You might consider instead having each pair of allies represented by a single color, so you have only white and black on the board.  This may complicate things because it means pawns can ‘advance’ in two directions, possibly even opposite directions… but this might solve the problem mentioned with promotion, so it may not be a bad thing.

This is just a random sort of idea I’ve had about a chess variant.  I haven’t actually tried it, but I think I might at some point.  If anyone else decides to give it a shot, let me know how it goes.