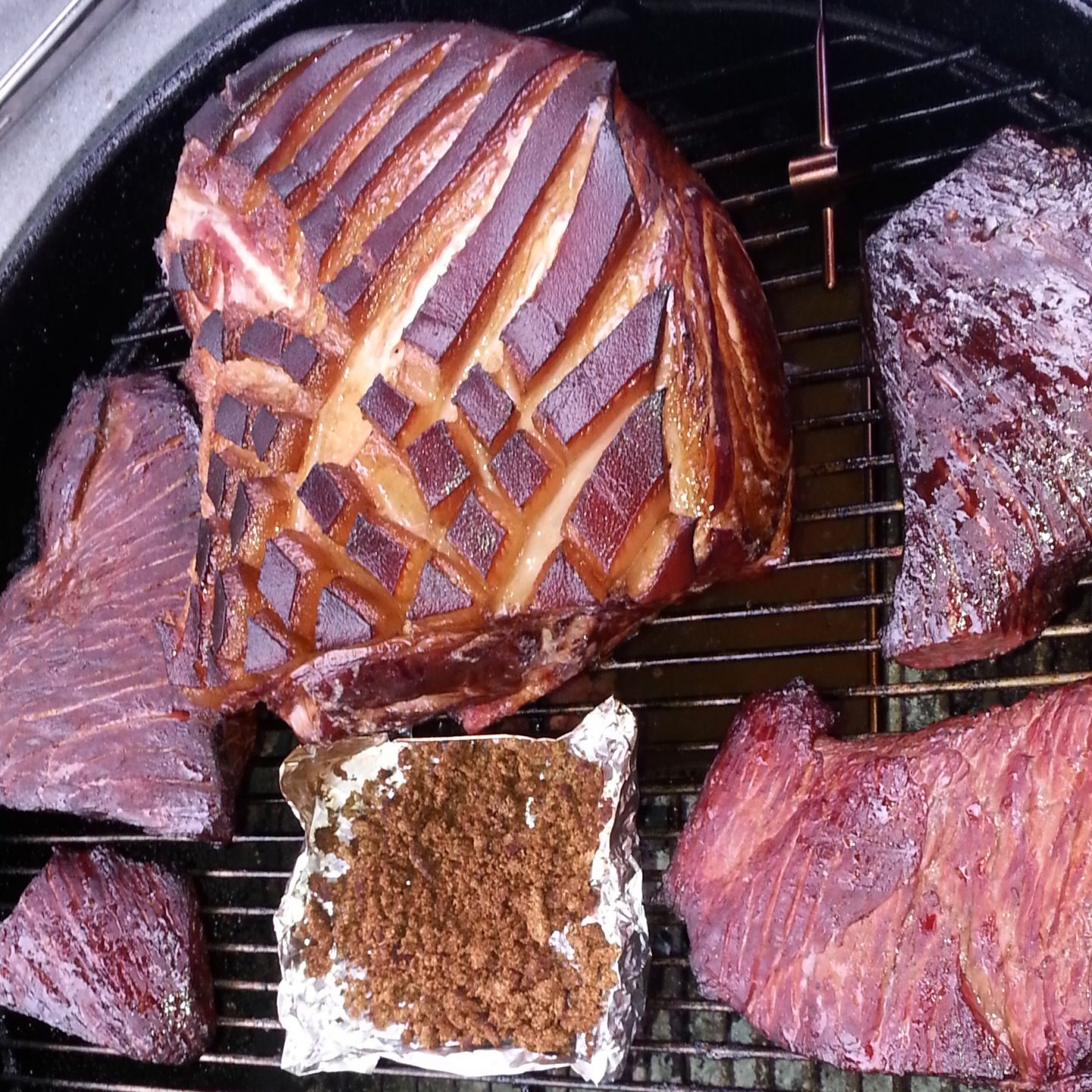 Ten days after I started brining the ham, it’s time to smoke one ham, two pieces of Montreal-style beef, and two pieces of corned beef.

I stopped scoring the skin on top of the ham. I think between being just a little too warm and my knife not being sharp enough, I stopped getting clean cuts. I think I’ve scored enough for today, we don’t need that much crackling and while I like the aesthetics of a neatly scored skin, ‘neatly scored’ is not in the books today so I stopped.

Next time, sharpen the knife better and try to have the surface closer to freezing temperature. Also, don’t score all the way down at first, just get through the skin and move on. Fat doesn’t offer a lot of support here, but even less when it’s been cut down to the flesh.

I put the meat in about 15 minutes ago. Then ran upstairs to get the drip pan I completely forgot — when I make pulled pork there’s some fat, and I can clean that up, but this a full-on ham and it’s going to make a mess. Drip pan it is.

I had to go out to adjust the temperature a bit, it had crept up to 230F. I decided to take a quick look to check on things.

I’m pretty sure I cut too deep into the fat. No matter, it’ll give good channels for the fat to run off. In the meantime, the skin is picking up some lovely color.

I suspect that because of how deep I cut the fat and how much the fat will render, some of the smaller bits of skin will, uh, fall off during handling. I’ll have to be careful.

The beef is looking good too. I moved a couple of the pieces a bit… I’ll likely be doing that as the day progresses, because I don’t want to cook everything too fast.

Still, the colors developing on the beef, especially the Montreal-style, are promising.

Wet brining turkey usually causes it to cook faster, I’ll have to keep an eye on these because they were soaked, adding more water to the meat.

I had the barbecue open for a while — it’s been a while since we’ve had hot dogs, and they’re pretty good when cooked slow. Once that was done I decided to flip the beef over to get some color on the other side.

Also, I added some more charcoal and my wife reminded me of the leftover paste from when I brined the Montreal-style beef. I made up a little tray to smoke it on, it’ll be interesting to see how it comes out.

Four hours in. Some good news, some learning experience.

Same arrangement as earlier, but I’d flipped them back to the first side. Lots of wonderful color and smoke has happened. Time to wrap the beef — part of the classic process for some smoked meats is to steam them after the initial cook, and what better to steam them in than their own juices?

The beef is at about 150-160F, which would be wickedly overcooked for steak, but still about 40 degrees lower than it takes to start melting the collagens and making it so, so tender.

Before wrapping, though, let’s give this a taste. Cut a bit off one of the smaller corners and… hang on.

That is way more grey than I’m happy with. There is pink on the outside, which is the smoke ring (carbon monoxide colors the meat pink), and pink on the inside (because of the pinking salts).

That pink in the middle tells me the brine penetrated that far, which is good. The grey around it therefore must be where the brine got leeched back out.

That said, this is the least-salty Montreal-style beef I’ve made, and that’s a good touch. It could actually use a bit more, but this taken from the smallest corner, where it would have been well-leeched. I suspect I’ll get more flavor as I move into the thicker parts, and more again as I get into the larger piece.

Also, the meat is still pretty juicy, and that’ll get even better as the meat continues to heat in the moist environment.

I didn’t take a photo of the corned beef, but since that bit was even smaller it looked much like this but without the pink bit in the middle. Again, the mildest corned beef I’ve ever had, I think.

Clearly 24 hours soaking, for the beef, was way too long. I suspected it would be, and now I know. I will need to think about a more appropriate soaking time… most recipes seem to suggest 2-3 hours or overnight. I might try six hours or so next time.

I sliced a bit off the hock, which was disproportionately brined (standard practice when dry brining ham, it helps get brine in around the bone). Despite the 24 hour soak, it was still a fair bit saltier than the beef. Less salty than other hams I’ve made.

The center of the rest of the ham is more important, so I didn’t bother taking a picture.

I just remembered my ulu knife, which has an insanely sharp semi-circular blade and is made for skinning meat and cutting skin. It totally would have done a good job on scoring the skin.

Everything is off the barbecue. I don’t have pictures of the beef because I wrapped it back up, but it’s >190F. So very tender right now.

The ham is clearly in the safe zone, >160F. I’ll normally leave ham around 145F-150F, today I took it a bit further because I was waiting for the beef… and the last 10 degrees came fast.

You can see a few little casualties among the crackling. Crunchy rather than crispy, but still tasty.

The recovered brine experiment seems to be a success. I spread the paste on a bit of aluminum foil and left it in the barbecue for a couple hours to dry out and pick up some smoke. It definitely did that.

Now I’m patiently using a spoon and a metal bowl to grind the bits apart. I tried a small piece, though, and whoo! Sharp pepper flavor, some good smoke, and I can still pick up the other flavors. No discernible salt or sugar, but I expected that. This will make some killer egg seasoning.

If it turns out to be too smoky, I can cut it with unsmoked spices (same proportions as above, or even just mix it with salt to make a seasoning salt.

Now that I’ve had time to shower (and no longer reek of smoke), eat dinner, and think about how things went, let’s look at the results.

The Ham was not fully Brined

The ham was pretty tasty, and while it was a little salty — it is ham, after all — it wasn’t too salty. The process as a whole looks promising, if not yet perfected.

The brine didn’t fully penetrate the meat. My initial estimate of two weeks, or perhaps 10 days and four days resting, was probably much closer than the estimate of one week I was given.

The triangular bit just above the bone shows where the brine did not reach. I see much better penetration through the skin than I expected… not nearly as much as from the right side, which was exposed flesh, but still much better than I thought it would.

When we have bone-in ham like this, after it cools we usually cut it up (pull it apart…) and remove the bone. That can go for stock immediately, or be frozen for later use. We leave the meat in the fridge for use, unless there’s too much for that to be convenient. In that case we freeze a portion of it for later consumption.

In this case, it gives a good opportunity to see how well the brine has penetrated. There is a sharp line showing where the brine reached and where it did not. That pale grey section in the middle — still nice and moist, I must admit — was not particularly ham-flavored.

It isn’t really evident here, and I don’t have a good picture of it, but I was gratified to see just how much penetration I got from the hock end. The brine actually worked its way in around the bone.

This is not a difficult problem. I just need to brine a bit longer, probably 10 to 12 days (which aligns with the “2 days per inch” guideline I’ve seen). I think I’d like to give it a few more days, rather than the single day I gave it, for the salt to even out. Whether I do this before or after soaking, I don’t know.

Beef was Soaked too Long

I have some pretty tasty smoked beef. But it’s not Montreal-style or corned beef, because most of the flavoring agents got washed out during the soak. They’re also the least-salty products I’ve made like this. I like that, but they lost everything else with it.

The beef is firm to cut but tender and pulls apart pretty easily. There is a solid smoke ring. But the two are almost indistinguishable in flavor.

I’ve used both of these recipes before and had them turn out fine. The corned beef was pink, and the Montreal-style was a deeper red. The brining process works, though not as thoroughly with the Montreal-style because of the other elements of the mix.

The only real difference lies in the process, where I soaked the meat for 24 hours. That was a mistake. I’m thinking perhaps 3 hours next time.

I’m going to call this an unqualified success. The paste I scraped off the Montreal-style beef appears to have become quite a nice blend. I spread the paste on a bit of aluminum foil folded into a tray and let it dry in the barbecue for a couple hours, breaking it up as it became more firm. I still had to grind it finer with a spoon in a metal bowl at the end, but that’s not terribly difficult.

Today, I learned. And honestly, I’m not particular disappointed in the results, I had a lot of experimentation going on here.

Also, I got quite a tasty ham sandwich out of it.