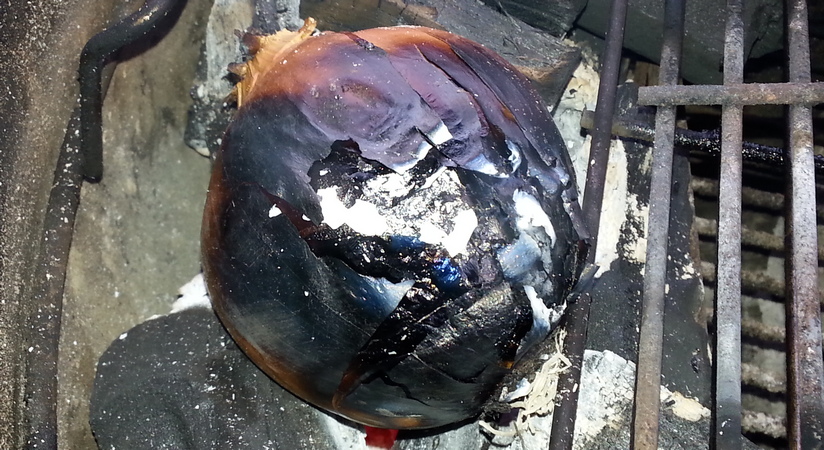 Another simple recipe/technique. This one caramelizes onion, without all the messy sauteing and whatnot. Today, I’m preparing this to go on a rib roast I’m also barbecuing.

Take one whole onion, skin on. Or more than one onion, but I’m only using one today.

Put the onion(s) directly into the charcoal.

Turn it periodically, every 10 minutes or so, for about three quarters of an hour… until the outside is black and crunchy, and the inside is really soft.

This is the first side done. The skin is crispy but will not taste good.

I’ll keep turning it every little while until basically it looks like this all over. At that point the inside will be quite squishy.

I just turned the onion a second time, and got a burst of steam and smoke. This could impart some sweetness to the roast I’m also cooking… I’ll have to see how it all turns out.

Black, shiny, still firm. Give it another ten minutes.

It’s actually not quite as squishy as I was aiming for, but a moderately gentle squeeze caused the core of the onion to shoot out the top. I’ll call this close enough, residual heating will get it the rest of the way.

I’m starting to peel the charred skin off the onion, and even this close to the surface it’s only got a bit of color.

I took two, perhaps three layers off the onion — about as much as I likely would if I were cutting it by hand, actually. There’s still a bit of char on the ends that I’ll remove when I’m cutting the onion for serving. The tiny bit on top I might even leave, the char at the root is, I hope, helping to hold this together. Charred onions are really slippery to cut.

I took the whole onion, trimmed off the charred top end but left the root end together for now to help it hold together. It was slippery but manageable.

This gives some very sweet onions that can be added to another dish, or served with meat. There should also be some smoke to them, but by the time I get to eat them I’m usually so smoky myself I can’t tell.

They do get some good results from my guests, though. And they’re simple and fun to make.