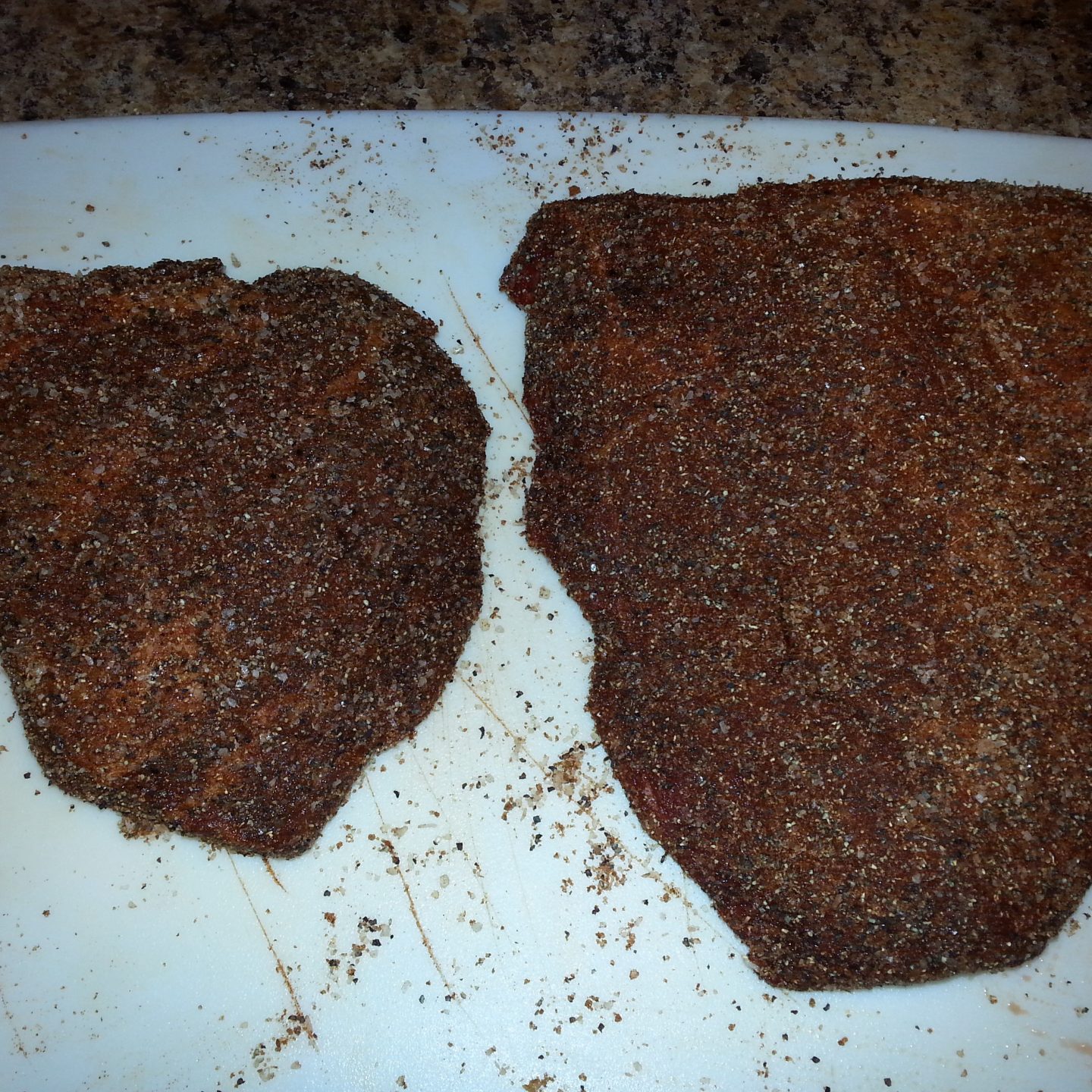 I’ve got two options today. One is a corned beef, the other is more or a Montreal-style beef.

Start with a couple chunks of cow.These are pretty lean, just what we want.

Did I say lean? Well, there’s not a huge amount of marbling, true, but this fat cap has got to go. It’ll inhibit the brining and inhibit the smoke later.

… I didn’t get a picture after trimming. The big chunk of fat cap is gone, and I’ve separated the two roasts each into two pieces. I tried to keep the larger pieces consistent thickness throughout, for even brining. I could have trimmed them up more and made them ‘perfect’, but I like having a few jaggy edges with more intense flavor.

Well, my mom does. I’m pretty sure that if I smoke these when she’s around, the jaggy bits won’t make it into the house.

Here are the two ‘halves’ of the larger piece, after trimming and separating.

And the two ‘halves’ of the smaller piece, after trimming and separating.

There is some slight inconsistency to the coloring that wouldn’t normally be evident. I’d originally trimmed and separated the pieces, but had to leave the entire thing for a while. I stacked all the meat and put it in the fridge for about six hours before I was able to get back to it.

I like corned beef, but generally not a lot of it at once. I’ll use the smaller pieces of each of the original pieces. I applied all the corned beef brine to these two pieces, and they’ll go into the same bag for the brining period.

It looks a little rough, and I have to remember to pick out the little bits before I smoke these. Being the smaller pieces they’ll probably smoke faster… I’ll have to remember to keep it very low when I do this smoke, and that won’t hurt anything at all.

I used a little more than half the rub. I’d always wondered why my Montreal-style beef was so much darker after cooking than the corned beef. I’m pretty sure it’s because the Montreal-style brine is about half the concentration of the original brine mix. This time, I think in about three days I’ll remove it from the bag, remove the liquids, and apply the remainder of the brine at that time. This process seems to be doing wonders with the ham, so I’ll see if this change gets a bit more into the meat.

These two pieces look so, so good… I admit that I’m kind of tempted to abandon my original plan and smoke them today, as-is. But I’m committed to brining these, it’s for Christmas.

I’ve been flipping the beef twice a day, and there hasn’t been much to show.

Today, I brought them in to apply the last of the brine I’d mixed.

These look gorgeous. A little garlicky, but that’s why I used garlic.

I had originally planned to remove the old brine and apply new, but seeing how well this is developing I didn’t have the heart. I just applied the remaining brine.

I haven’t decided my timing on these. I’m really tempted to just smoke them with the remaining brine applied — the salts have done whatever they’re going to do — because it looks like it should be just great. I know from experience, though, that I’ll end up with a smoky paste on the outside of the meat, much of it scraping off with handling.

That paste, if I could collect it, might do some wonderful things in other dishes, but… no. I’m not entirely sure it’d be safe (probably would; it’ll get above sterilization temperature fairly quickly and stay there while smoking), and it’ll prevent the smoke from getting to the meat.

I think the plan will be to let it brine until Friday night, wash off the brining mix (both the Montreal-style and the corned beef), then soak both for 12 hours. That is, when I stop soaking the ham, start soaking the beef — all in separate containers! Even if I do reuse the container I soak the ham in, I’ll wash it first.

Then let them all air dry for 24 hours before smoking. These are smaller than the ham and won’t need as much soaking.

As with the ham, I’m going into the final preparations.

The other times I’ve made corned beef, I’ve just rinsed the brine off and smoked it. This time I cleaned it off (about as well as I normally do, I see I missed a bit of pickling spice at the bottom end of the larger piece) and will soak it overnight, then let it air dry before smoking.

I see that the meat is quite a bit darker than when I started, and felt that it is firmer. I didn’t weigh the pieces before I started, but they do weigh less than I’d estimated (and the total, all four pieces, weigh less than they did at the start… but I don’t remember the exact weight).

I’ve taken a spoon and scraped the spice paste off the larger piece (both pieces here for comparison). There was a fair bit of paste altogether, so I think I will try smoking it: spread the paste on some aluminum foil folded into a small pan, then put in the barbecue to dry and pick up some smoke flavor. All the salts and sugar in it should be pretty much gone, absorbed by the meat, so what’s left might give me a nice mix to use for other purposes.

And it if doesn’t, it cost me nothing more than a bit of aluminum foil and a few minutes of my time.

And here are the two pieces after removing the leftover spice paste and rinsing clean. These pieces are also firmer than when I started, and seem to have a bit darker color than the corned beef — probably a combination of the brown sugar, paprika, and possibly the black pepper.

I would they they would taste really quite good if I grilled them right now, actually… but I’m not going to.

It’s December, after all, so we’re well past due for our first big windstorm of the season. Yesterday was a good one.

I have a small yard, but it collected a lot of debris from the nearby trees. No damage, thankfully, and the mess cleans up with an hour or so of work.

Sunday is supposed to be pretty decent in comparison. Showers and light winds, and I can deal with that no problem.

I’ve soaked the pieces for 25 hours now. There’s quite a bit of color in the water, much more than with the ham.

My first thought that some of this would be from the brine, but it won’t be very much. The Montreal-style has paprika and black pepper, would would add some color, but the corned beef really doesn’t have anything to make it so dark. This is almost certainly blood that was pushed out by the soak.

Which is good! Because that suggests that the brine in the meat was partly removed (reducing the saltiness) and even more, the water will have helped distribute the brine and flavor through the meat.

It does make it easy to see which piece is which, doesn’t it?

I then took all the meat out to the garage to air dry for the next 24 hours or so. One of the nice things about doing this in December is that it’s nice and cool out there, and I can get away with this.

I’m showing this picture first because it’s got better lighting.

I realized after taking the picture above that this is a better arrangement because it keeps everything a little farther from the heat exchanger at the back of the fridge. It probably wouldn’t matter, but it won’t hurt.