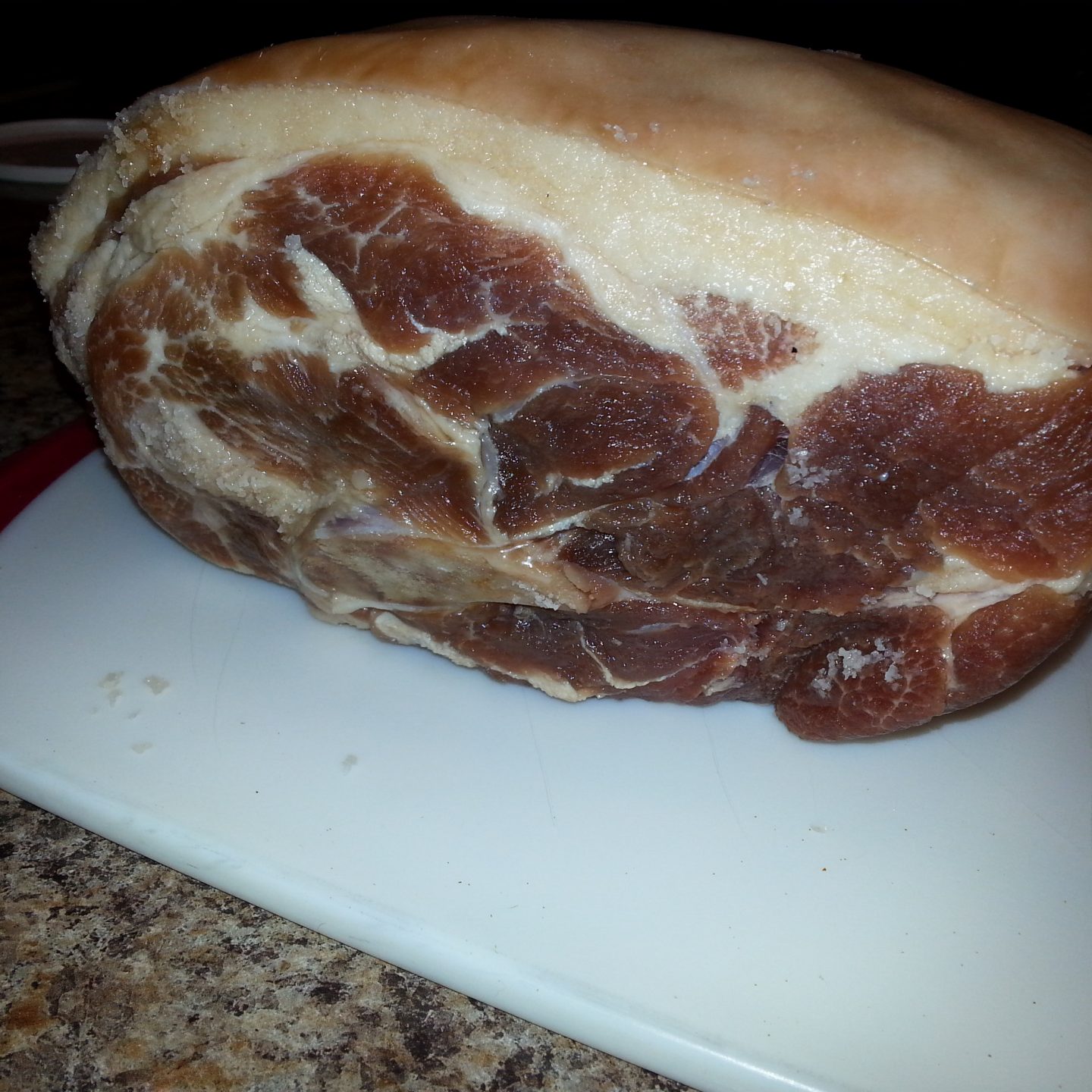 Not ‘cooking ham’, but for converting an unsuspecting chunk of pig into something pink and delicious.

I coated the entire surface with brine mix, making sure to loosen the skin at the hock and the flesh around the bone of the hock and pack some in there. I used perhaps 1/6 of the entire amount.

I placed the ham in a food-safe plastic container (ice cream bucket), hock down.

Each day for the next week or so I’ll be removing and discarding the liquids that come out (water with dissolved brine, basically) and applying new brine.

A week from now I’ll take the entire thing and soak it for a day, to draw off some of the salt and help equalize it, then let it air dry for a couple of days to allow he pellicle to develop. The pellicle develops as proteins rise to the surface of the meat, forming a thin, shiny surface that provides a very good surface for smoke to bind to later.

It’s been two days since I first set the shoulder to brine. I pulled it out yesterday, drained off half a cup of ‘liquor’ (mix of water and dissolved brine mix… mostly; I don’t recommend drinking it). I then applied a new layer of brine mix and put it back out for another day.

Today I took it from the fridge and poured off a quarter cup of brine, and took some time to inspect it.

The skin is picking up a bit of color, I suspect from the brown sugar as much as anything. The flesh is also getting a bit darker, which also is in part due to the sugars but also because it’s starting to dry a bit.

If you look closely, not all the sale from the previous application has dissolved. I am not rinsing it off between applications, so this will likely continue.

I applied a fresh coat of brine mix, making sure to pack it around the hock. The hock appears to be curing faster than the rest, which stands to reason — it’s a smaller piece of meat around the bone, and it’s getting more brine mix applied. It’s definitely firmer and darker than the rest. I hope the brine is penetrating from that end as well, but I’ll only know when I’m done.

As you can see, the ham is a fair bit smaller than when I started. When I first put it in the bucket a couple days ago, it really only fit one way and was tight against the edges. As you can see, there’s now getting to be a fair bit of space around the product. I’ll never be able to lie this piece down in this bucket because it’s simply too long, but I could probably flip it over if I wanted. Since conventionally ham is hung hock-down, I likely won’t do that.

I’m starting to think Chaz was right, that this could be successful as a one-week brine. What I’d read before suggested a two-week minimum, but that generally involved a single application of brine mix and then leaving it. In this case the daily application of fresh brine mix (which in the end uses way more salt and sugar than I usually might for a piece this size) might be enough to get it done. I’m inclined to give it a shot.

Not a lot of change. I’m getting only small amounts of fluid out of the product now, and there is an increasing amount of brine mix left on the surface each day.

The meat continues to darken and firm up. In three or four more days — recipe says three, I might go one more — I’ll stop brining the ham, soak it for a day, then start letting it air dry for a day or two. I expect to smoke it on Sunday.

I’ll have to remember to weigh this before and after soaking. I started just about spot on eight pounds, it’ll be interesting to see how much was lost to the brining process, and how much water uptake there is.

Six days in, and I think the brining is almost done. I checked on it last night when I got home and saw there was still a fair bit of dry brine on the outside. This tells me I’m probably not getting much more uptake, so I didn’t bother brining yesterday.

This is from the top, and you can see how much brine remains on the skin. This doesn’t surprise me, since skin is relatively non-porous. Still, that does not mean totally impenetrable.

What really interests me here is how saggy the skin looks, compared to how it started. There’s been some significant volume reduction under the skin.

Out of curiosity I weighed it. I started with a little over 8 pounds of shoulder. Even after applying more brine, this was 7 pounds, 7.4 ounces — over half a pound lost.

I’m pretty sure now this is going to work.

I’m giving it one more application of brine. I’ll leave it until tomorrow, at which point I’ll bring it in and wash it off, then leave it to soak in water for a day or so. That should help reduce the intensity of the salt on the outer parts, and hopefully help the salt penetrate a little more and even out internally.

I’ll weight it before and after the soak, just to see if it picks up some of the water.

Then I’ll leave it to air dry in the fridge for about 36 hours — Friday afternoon/evening sometime to Sunday morning — and then smoke it.

I’m actually a day late here, we had a power cut and I was out of the house when I should have done this part. The whole process is pretty forgiving, though, 12 hours won’t matter.

I’m done the initial brine now, so it’s time to clean the ham off.

There’s a fair bit of salt still on the surface of the meat. Any more uptake is going to take an unreasonable amount of time.

I do notice that the flesh is quite a bit firmer than when I started, especially in the hock. I don’t know how far the brine penetrated, but it certainly did penetrate.

And here we have a lovely example of total inconsistency.

Next time, I’ll try to get the same series of shots, with the same lighting. The picture at the top of this update might seem like I was trying to be dramatic and force the viewer’s eye to the focus of the photo… but really, I didn’t have the ceiling lights on.

Only for completeness. If I’d had the sense to get all the same shots at the start and with consistent lighting I’d probably show the start and end state of each shot.

I can say with certainty that the flesh is darker and firmer, and the the skin is darker (mostly from the sugar, I suspect… which makes me wonder what the crackling is going to taste like) and a bit sagging where the flesh under it as shrunk.

Now, into a bucket of cold water until tomorrow, then air dry until the morning after, and into the smoker.

Almost done. Just, what, two more days? 48 hours from now it will still be in the smoker.

I let the ham soak for about 25 hours, give or take. I can see some color in the water (shown below), but it’s nothing compared to what I saw with the beef .

I suspect much of the color comes from sugar drawn from the meat, and some lingering blood — but not much, given how pale the water is. The meat is somewhat paler than it was yesterday, though.

Maybe I’m just too close to the meat or something? I swear, I do have the lights on.

The flesh is quite a bit softer than it was yesterday, and both the flesh and the skin are paler. When I weighed it the piece was about 3-3.5 ounces heavier, so it took up almost half a cup of water.

One of the advantages of doing this in December is that it is cool enough in the garage for me to get away with this… though I’m using this picture only because the lighting is better.

It makes more sense to arrange them this way, to get away from the warmer air coming off the heat exchanger at the back of the fridge.